It was back in 1983 that he graduated from Stanford with a self-designed degree in English, Creative Writing and Storytelling, and set off to travel the world, gathering and telling stories. Since then he has told stories and taught storytelling in some 36 countries throughout North and South America, Europe, the Middle East, Africa and Asia.

With every stop on his itinerary, his repertoire of stories has grown. Some are tales from people he meets on the road, and others he finds are traditional tales from the places he’s traveled. Then there are the stories that seem to find him – and stick. These are true stories, more or less, and what he’s come to love over the years is the blend of all these stories together.

Virginia lived in Colorado for over 57 years with most of them spent in Westminster and, after retirement, in Broomfield. She grew up in Illinois and traveled west in search of clean dry air and open spaces. Virginia fell in love with the beautiful Rocky Mountains and adopted an active lifestyle taking every opportunity to play tennis, run road races, hike, camp, ski and gaze at the stunning views of the northern Front Range. Retirement from the school district allowed Virginia to follow her second career path as an author of children’s stories which were published in several books. While the written word in story and poem form were near to Virginia’s heart it was in story telling that one of her true lights shined. Virginia was a Master Story Teller and through her business Fox Tales was widely sought after to educate, entertain and mesmerize audiences at Women’s Camps, university classrooms, primary school assemblies and birthday parties. Virginia’s compelling and often humorous story content, along with amazing delivery, drew in every listener and compelled those in the hallway to step into the room to hear more.

A fairy tale believer since the beginning of her time, Isabelle Hauser discovered the path of storytelling training with professional storyteller Liz Weir in Northern Ireland. When Isabelle is not telling tales or playing the harp on various stages in Switzerland and abroad, you can find her talking to the swans on the shore of her hometown lake, looking for four leaf clover, or chasing rainbows in the surrounding forests. 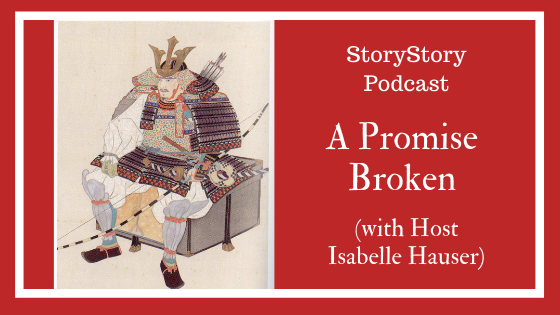 Shop at the StoryStory Boutique!
Support the Podcast and earn some sweet rewards! One time donation to buy me a cup of tea!

Discover all the Fairy Tale Sponsors!